Windsor makes look on The Simpsons

Has Windsor finally made it, now that it appeared on The Simpsons?

Our fair border city has been mentioned on national American TV before — but not in cartoon form. And probably not in as fine detail as it was Sunday night on the longest-running animated show on television.

Unmistakable Windsor sights such as the Ambassador Bridge and the Detroit skyline from the Canadian side of the river were rendered in two-dimensional Simpsons fashion.

The plot of D’oh Canada — the 21st episode of The Simpsons’ 30th season — involves Lisa Simpson being granted political asylum in Canada.

Like any concerned mother, Marge Simpson decides to rescue her daughter by getting herself smuggled across the Ambassador Bridge in the trunk of a car. 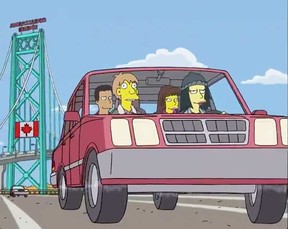 The Ambassador Bridge on the episode of The Simpsons that premiered April 28, 2019. Photo by Fox TV /Windsor Star

But the recurring Squeaky-Voiced Teen character manages to pass off his “car tail” as another “stupid new American fad.”

No character actually mentions Windsor in dialogue, but a sign clearly shows the name of the city as Marge makes her border-crossing attempt.

Squeaky-Voiced Teen even tells Marge that his real reason for crossing the border — like so many other 19-year-old US visitors to Windsor — is to buy beer.

“We all know,” says everybody on the bridge in unison.

Later in the episode, Lisa sits on Windsor’s riverfront, gazing at the immediately recognizable GM skyscrapers and Renaissance Center.

Homer and Bart eventually join Marge and Lisa, and the united Simpsons family runs for US soil across the frozen Detroit River.

Social media reactions from Windsorites have ranged from bemusement to pride, with some claiming they can see local landmarks like Caesars Windsor and University of Windsor buildings.

The reason for such accurate Canadian references? The episode’s consulting producer Tim Long grew up in Huron County, near London.

Windsor hasn’t had this much good publicity since Stephen Colbert called us “Earth’s rectum” on The Comedy Network in 2012. 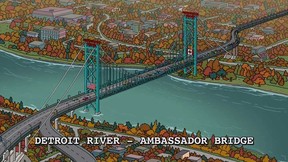 The Ambassador Bridge, as depicted on The Simpsons episode D’oh Canada, which premiered April 28, 2019. Photo by Fox TV /Windsor Star 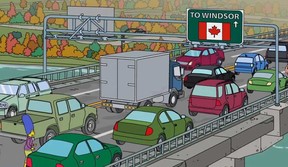 Marge Simpson attempts to cross the border into Windsor, Ontario, in the episode of The Simpsons that premiered April 28, 2019. Photo by Fox TV /Windsor Star 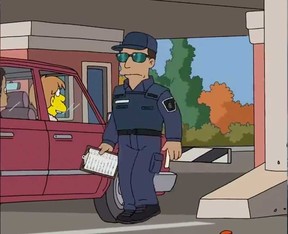 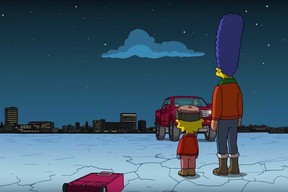 Homer takes a truck onto the frozen Detroit River in the episode of The Simpsons that premiered April 28, 2019. Photo by Fox TV /Windsor Star