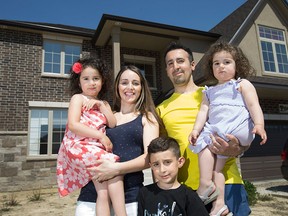 The Bakkaoui family, from left, Olivia, 3, Catherine, Isaac, 5, Kahlid, and Sofia, 1, are pictured in front of their new home in LaSalle, Monday, May 23, 2016. Photo by Dax Melmer /Windsor Star

“We wanted to get away from the city,” said Bakkaoui, father of three children ranging in age from six to two. “We lived on Victoria; it’s a beautiful area, but it doesn’t feel like it would be safe for a young family.”

“The demand is there, the new schools are out there, and you have recreational facilities like the Vollmer and Atlas Tube centres,” said Peter Valente, president of Valente Home Development. “Those attractions make the suburbs the No. 1 choices of families.”

Windsor, added Valente, has two notable disadvantages: higher development fees and a lack of readily available land with access to services. “The next area for growth will be near the airport, but that land is not ready yet,” said Valente.

At a time when the region’s real estate market is on fire, when demand is outstripping supply, generating multiple bids and steadily rising transaction prices, much of the new residential construction is taking place outside of the city, said Ben Klundert, president of the Windsor Essex Homebuilders Association.

If the quarter’s numbers remain consistent throughout the year, Windsor will see just under 400 housing starts this year, said Klundert. That’s a big improvement during the 2008-2009 recession when the city sustained net population loss, but much lower than the 1,200 housing starts the city recorded during the last housing boom in 2004, he said.

“At that time, Windsor had the lion’s share of starts. We’re not even close to those kinds of numbers. It’s a complete role reversal with the suburbs.”

John Revell, chief building official at the city’s planning department, said the city is buzzing with new housing activity. “There are projects in the works,” said Revell. “They are not really huge ones, but more modest sized.

“I had a contractor tell me he’s bringing in eight new houses on Robinet Road. These are houses that are sold, not projects that are speculative.”

The increase in the value of building permits proves the city has not priced itself out of the market when it decided last year to raise residential development charges over five years from $18,291 to $26,874, he said. 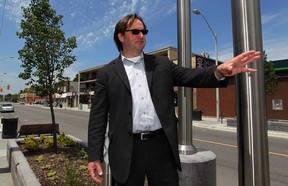 City planner Thom Hunt said “a complex number of factors” influence a family’s decision on where to move. “I’ve asked people about it myself, because I’m concerned,” he said. “Taxes, development charges — they don’t come up. The big factors are schools, proximity to work and recreational facilities.”

Windsor still has serviceable land available, particularly in the east Riverside area, said Hunt, adding that the next big development opportunities will center around the airport lands, consisting of about 1,345 hectares.

“If you look at the Great Recession, that’s where things sort of stopped from a big numbers standpoint,” he said. “Slowly, we’re coming back, and hoping to hit pre-2008 numbers.”

Proponents of higher development fees argued that “growth must pay for growth,” and cover the costs for infrastructure required to provide municipal services to new subdivisions, while critics said the higher fees would inflate the cost of new homes and drive residential development outside of the City.

For Bakkaoui, LaSalle offers the amenities of the city without the higher cost of living. Property taxes on his 2,900-square-foot, four-bedroom, three-bathroom house are $1,500 a year lower than it would be for a similar home in Windsor, he said. His son, who is a pupil at Sandwich West French immersion elementary school, plays soccer and takes swimming classes at the Vollmer recreational centres. And Bakkoui’s drive to his job in South Windsor still takes about 10 minutes.

More importantly, his new neighborhood is full of young families. “I feel there’s a strong connection with all the neighbors,” he said. “Where I used to live, it was ‘hi and bye.’ Here, you talk to your neighbor, and before you know it 20 minutes have gone by.”