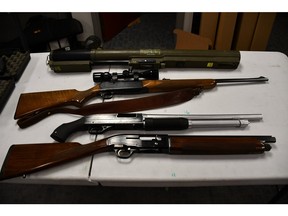 A cache of weapons, including a rocket launcher, was seized by Windsor police on Jan. 13, 2023, and two suspects were arrested and charged following an investigation in east Windsor. Photo by Photo courtesy of Windsor Police Service /Windsor Star

A rocket launcher designed to destroy army tanks was among the deadly arsenal seized by Windsor police Friday after an investigation by its drugs and guns unit in east Windsor that resulted in the arrests of two local men.

Executing a search warrant on Jan. 13 in the 1900 block of Bernard Road, officers seized five firearms, a set of brass knuckles — and an M72 rocket launcher. The latter had been fired and there was no ammunition to go with the single-use weapon designed for military use to destroy tanks in close-range combat.

James St. Jean, 27, of Windsor was arrested at the scene and faces a long list of criminal charges, mostly firearms-related. Wilfred St. Jean, 45, was taken into custody on Sunday in the 3400 block of Ypres Avenue and faces most of the same charges.

James St. Jean is charged with 15 counts, all the same as James except for the three counts of failure to comply with a release order. 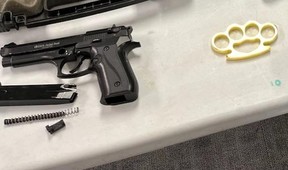 A cache of weapons, including an EKOL Jackal Dual 9mm Blank handgun and set of brass knuckles, were seized by Windsor police on Friday, and two suspects have been arrested and charged following an investigation in east Windsor. Photo by Photo courtesy of Windsor Police Service /Windsor Star

The M72 series of disposable, single-shot rocket launchers is a common military weapon found in war zones around the globe.

Last March, Canada committed to supplying Ukraine with 4,500 M72 LAW (Light Anti-armor Weapon) rocket launchers in its defense against Russian invaders. With a firing range of 10 to 200 metres, the M72 is designed for close-range combat and is equipped with a warhead its manufacturer claims can pierce through 300 millimeters of armour.

Firearms, often linked to the illegal drug trade, are frequently the subject of Windsor police investigations. Windsor’s most recent murder victim, Daniel Squalls, 24, was shot and killed in a city residential area on Nov. 28.

Rocket launchers, however, are weapons not normally seen on the streets of any North American city. 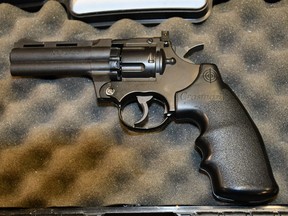 A Crosman .177-calibre pellet revolver was among the weapons seized last week by members of the Windsor police DIGS unit. Photo by Courtesy of Windsor Police Service /Windsor Star

Windsor-Essex companies fed up with newest shutdown, need all industries to be handled equally