Small-business owners in Windsor-Essex say they are struggling to stay afloat amid skyrocketing grocery prices and changing customer habits.

Earlier this week, Bad Witch Bakery announced that it would be closing its doors after a difficult year of supply shortages, inflation and burnout from running a small business.

The bakery isn’t the only Windsor business closing before the new year.

Robbie Bornais, owner of Robbie’s Gourmet Sausage Company, said that after running his business in Windsor for nine years, he will be closing his doors to the public.

With inflation raising the cost of ingredients, Bornais said he had to walk a fine line of increasing his prices to cover inflation. He said he has lost almost 1,000 customer visits in 2022, and a year’s worth of salary.

“People are just not coming through the doors anymore,” he said.

‘Death by a million paper cuts’

Adriano Ciotoli, founder of Windsor Eats, which showcases restaurants and bars in Windsor-Essex through his website and food tours, said there are more closures to come.

“We know of many businesses that are pretty much in the planning stages of announcing they’re closing,” he said.

Ciotoli said he knows other small business owners who have taken on second jobs to pay staff because there isn’t enough revenue.

“Windsor Eats has been around for 18-plus years, and this is probably the worst year that we’ve had,” Ciotoli said.

Adriano Ciotoli, founder of Windsor Eats, said he’s aware of many local businesses that are planning to close and knows other small business owners who have taken on second jobs to pay staff because they don’t have enough revenue. (Katerina Georgieva/CBC)

He said customer habits have changed since the COVID-19 pandemic, and with inflation and customers not wanting to get sick, “things just keep compounding” to keep business low.

Ciotoli said businesses are currently struggling with so many issues that it’s hard to pinpoint one root cause.

“It’s death by a million paper cuts,” he said.

For new business owners like Carley Noelle — who opened her Walkerville vegan grocery store, Ethos Grocery, in September — the lack of customers has come as a surprise.

“It’s certainly been harder than I was expecting it to be,” she said.

“I’m bringing a new product to the market, and it’s definitely an underserved community, so I was anticipating higher foot traffic,” Noelle said.

When she initially opened her store, Noelle said she thought having longer business hours would help bring in customers, but she found foot traffic remaining low.

“I’ve had to bring my hours down because right now it’s just me and an employee on the weekends,” she said. 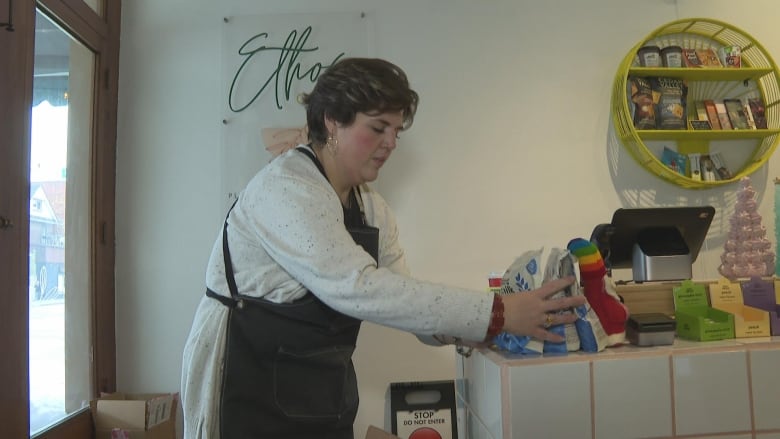 Carley Noelle opened her vegan grocery store in Walkerville, Ethos Grocery, in September. She said she isn’t sure she will make it to the new year. (Katerina Georgieva/CBC)

Noelle said that if things don’t pick up at her store, it will be a challenge to bring her business into the new year — but that doesn’t mean she’s giving up.

“I’m a fighter and I’m gonna keep going as long as I possibly can. I’ve got a lot of plans. Definitely need the support of the community to be able to get there.”

Both Ciotoli and Bornais said they have received a lot of support from the community through social media, but the online support isn’t translating into enough sales.

“Our popularity on social media has never been higher,” Bornais said.

“We have more reviews than ever, more positive five-star reviews if you look at Google and all the different spots,” he said. “So our popularity and the respect [they] have for us is very high,” he said.

Bornais said he loves his customers, even the ones who might have stopped shopping because of their own financial situations.

“These are just terrible, tough times, and this is what happens. Sometimes life throws you a curveball,” he said.

“Whether it’s buying gift cards at local establishments or planning little get-togethers with their friends at local restaurants and bars, but really trying to spread as much of the dollars locally as possible,” he said.

Inhabitants of Windsor-Essex area on the rise: census