The Prince and Princess of Wales and the Duke and Duchess of Sussex seemed relaxed together as they reunited at Windsor Castle on Saturday.

The royal couples, dubbed the fab four, were last seen together in public on Commonwealth Day in 2020, two months after Harry and Meghan announced their plans to step back as senior royals.

Despite reports of a rift between the two brothers, both William and Harry remained cordial to each other, regularly interacting with each other.

A royal source said the Prince of Wales asked his brother and his wife to join them during the walkabout on Saturday, where they read tributes and met dozens of members of the public.

Arriving and leaving together in the same Audi car, William and Kate and Harry and Meghan remained in their married couples during the visit, but the four spoke regularly to each other when reading the tributes.

The mood between the couples was sombre at first as they gazed at the flowers, but later became chirpier as they spoke to the excited crowd.

At several moments, each royal pointed out different messages that have been left by well-wishers at the gates, discussing them amongst each other. 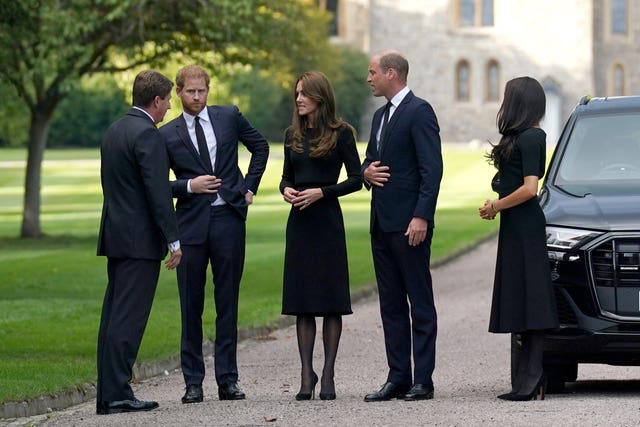 (from second left) The Duke of Sussex, the Princess of Wales, the Prince of Wales and the Duchess of Sussex (Kirsty O’Connor/PA)

They then split up into their pairs, with William and Kate taking one side of the barriers to speak to visitors, while Meghan and Harry took the other side.

Both William and Harry showed support for their wives at certain moments, with both royals delicately placing their hands on their backs as they spoke to the crowd and read tributes.

The atmosphere was upbeat throughout, with the crowd regularly chanting William and Harry’s names to try and get them to come over and speak to them.

The Prince of Wales was seen having candid conversations with some people and laughing and joking with others.

Each royal received bunches of flowers and gifts from the public, with William at one point receiving a toy Paddington Bear, a nod to the Queen’s sketch with the children’s character earlier this year.

The Duchess of Sussex was meanwhile seen being given a close hug by a teenager in the crowd.

The pair spoke briefly for a few moments and Meghan could be seen assuring her by putting her hand on her shoulder.

The girl then said “Can I have a hug?” and Meghan was seen nodding, before leaning in and giving her a big hug.

The visit lasted in total for just over 40 minutes, with the crowd chanting “Hip, hip, hooray” as the group left.

Julie Watson, 56, said it was “lovely” to see the group appear together.

She met Kate during the walkabout and said: “I love Kate. She’s beautiful. I said I feel sad that the Queen has passed away and she had a tear in her eye.

“She wasn’t crying but her eyes looked watery.”

Her daughters Skye, 13, and Faye, 10, shook hands with both Kate and Meghan. 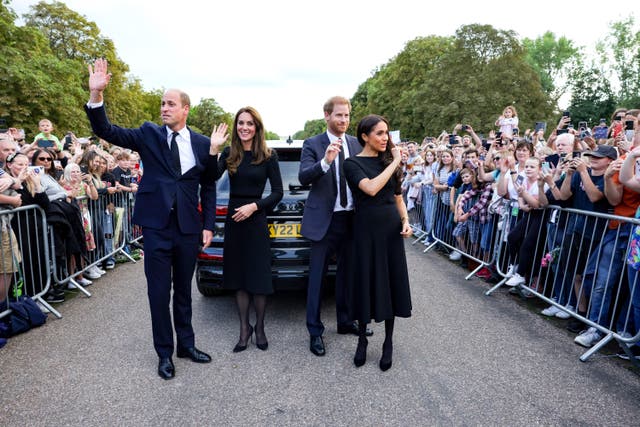 Angela Fleming, who met the Duke of Sussex, said that the hour-and-a-half wait outside was worth it, describing their appearance as “unexpected.”

Banita Ranow, 28, among the crowd on the Long Walk, said she heard Kate tell children next to her about what her youngest son Louis had said about the Queen’s death.

She said Kate told the children: “Louis said at least Grannie is with Great Grandpa now.”

Ms Ranow said Kate was “welling up” as she spoke to the children.

Her mother Baljinder Ranow, 64, said the visit was “fabulous”, adding: “It was so beautiful to see.

“I felt so emotional and I felt the Queen would have loved it.

“I just hope in the future they remain like that and that the brothers come together, and the families.”