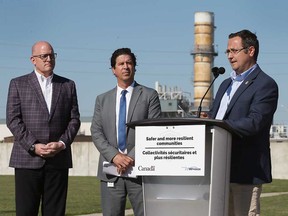 Ottawa is giving another big boost to Windsor’s fight against flooding.

On Wednesday, Windsor-Tecumseh MP Irek Kusmierczyk announced that the Trudeau government will contribute $32.74 million from the federal Disaster Mitigation and Adaptation Fund to build a new retention treatment basin, a new pumping station, and a secondary “outfall” pipe.

The project — with an expected total cost of $82 million — will greatly enhance the Lou Romano Water Reclamation Plant operations on the city’s west end, officials said.

“With these historic investments, our federal government has demonstrated to the City of Windsor and neighboring municipalities that they have a true partner in Ottawa,” Kusmierczyk told media.

“This is teamwork that delivers for our community.”

The nearly $50 million remaining cost for the project will be covered by the City of Windsor. 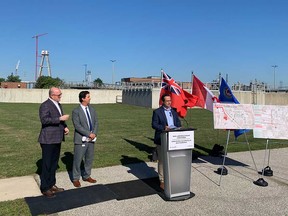 “We never miss an opportunity to match funding,” said Windsor Mayor Drew Dilkens. “We have a $5-billion sewer master plan. We need to implement that plan.”

Chris Nepszy, the city’s engineer and commissioner of infrastructure services, said the design phase of the project will begin in 2023, with project completion expected around 2030. The new retention treatment basin will be Windsor’s largest to date.

Nepszy described the Lou Romano Water Reclamation Plant as “one of the most important pieces of infrastructure that we have,” servicing West Windsor, South Windsor, and LaSalle.

“We’re talking about 62,000 homes,” Dilkens said. “The goal is to try to end basement flooding, once and for all.”

“But we can’t do this alone. The city cannot fund these types of projects alone. We need good partnerships. We need the federal government to come onboard.” 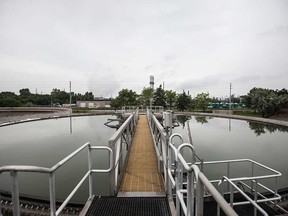 A view of a portion of the Lou Romano Water Reclamation Plant in Windsor’s west end in 2015. Photo by Dax Melmer /Windsor Star

Kusmierczyk said that once the project is operational, it will help handle the century storms and record-breaking rainfall that the city has experienced in recent years.

He recalled the massive flooding that occurred in Windsor in 2016 and 2017, when he was city councilor for east Windsor’s Ward 7.

“Climate change is real — and no community in Canada understands that better than ours,” Kusmierczyk said.

“I will never forget standing with a family at the steps of their basement and staring with disbelief at over three feet of water.”

Since 2019, Canada’s federal government has invested $90 million in disaster mitigation and adaptation infrastructure in Windsor-Essex.

In 2020, the federal government approved infrastructure grants of $10.7 million for Tecumseh and $14.8 million for Lasalle.

Kusmierczyk said that in his 2019 campaign to become Windsor-Tecumseh MP, one of his promises was to secure funding to help modernize Windsor’s infrastructure and protect residences from flooding.

“In the last two-and-a-half years, I can say that we’ve delivered,” said Kusmierczyk, a member of the Liberal government. 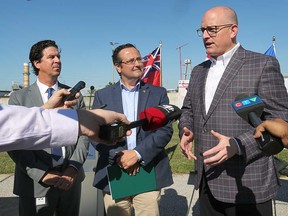 The mayor’s office also noted that Dilkens met with senior representatives of Dominic LeBlanc, federal minister of intergovernmental affairs, during the Association of Municipalities Ontario conference in Ottawa in mid-August.

While Kusmierczyk repeatedly emphasized the “strong partnership” between the Government of Canada and the City of Windsor at Wednesday’s funding announcement, there still hasn’t been word on whether any federal help is coming for Windsor’s $5.3 million in extra policing costs during the Ambassador Bridge blockade in February.

“At the end of the day, that was not a normal municipal policing operation. That was to deal with a national economic emergency,” Dilkens told reporters.

“We’re going to keep fighting (for funding). We’re not going to let this go. We will continue to advocate (on this issue), because Windsorites should not have to shoulder that burden.”

—with files by Taylor Campbell