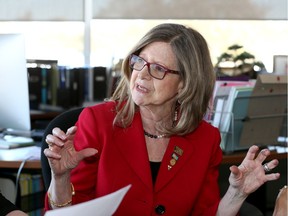 Ontario’s registered nurses are ramping up pressure on Windsor Police Chief Pam Mizuno to equip her officers with the antidote for opioid overdoses in the midst of a “public health crisis.”

The petition calls for Mizuno to ensure officers receive training in the use of naloxone, and that they carry it while on the job. It also pushes the city to open a safe consumption site for drug users in the hopes of preventing overdoses.

Grinspun, noting her association has been lobbying Windsor and its police service on this issue for a year, said Friday that the chief and the mayor should be ashamed of themselves for not acting.

“I absolutely say shame because it’s peoples’ lives,” she said. “It’s people in your community. Every other community is using naloxone except for Windsor.

“Chief Mizuno has already spoken publicly regarding the topic of Naloxone, and that position remains,” police spokesman Sgt. Steve Betteridge said in an email.

Dilkens did not return the Star’s call asking for comment.

The nurses’ petition, listed as an action alert on the RNAO’s website, is titled “Demand an end to overdose deaths in Windsor.”

Grinspun said Friday more than 1,000 people had already signed the petition in a couple of weeks.

The petition mentions Mizuno by name: “I encourage you to urge Windsor Police Chief, Pam Mizuno, to a) ensure her workforce carries and is trained to use naloxone, and b) demand a Consumption and Treatment Service site for Windsor. ”

The RNAO also points out that Windsor is the only major city left in Ontario where officers don’t carry naloxone. The association explains that, in 2018, 51 people in Windsor/Essex County died from opioid-related overdoses. Another 22 people died in the first three months of 2019, double the number from the same period last year.

Grinspun said a safe consumption site would make things safer for everyone.

“The syringes are in your yards and your parks, and behind houses and everywhere in the street,” she said. “To have a consumption service, it’s better so you do it in a supervised way, and not the way you do it in Windsor.”

Former police chief Al Frederick, who retired at the end of June, was opposed to creating safe consumption sites and allowing officers to carry naloxone.

Mizuno has said she’s not going to change Frederick’s direction.

But the union representing officers wants its members to carry naloxone.

“The association has been in favor of naloxone kits for our members, to protect our members from potential exposures,” said Const. Jason DeJong, President of the Windsor Police Association. “We think it is a good tool for health and safety.”

There is the potential that police officers with naloxone could also save civilian lives, he said, but the direction needs to come from management.

“Ultimately, we understand that it can also save lives in the community, and that is part of our mandate in policing,” said DeJong.

Grinspun said it’s a life-and-death issue. During a Windsor visit earlier this month to meet with nurses, she drew the mayor’s ire with public comments that Windsor police must join the rest of Ontario and start carrying naloxone.

“I appreciate the head of nurses from Toronto informing us on what we should be doing in Windsor,” Dilkens told reporters following Grinspun’s visit. “But I like to make decisions based on data. There is nothing presented to me that shows arming our officers with naloxone is the right thing to do.”

The head of the nurses’ association shot back with a letter to the Star’s editor stating that nurses urge Dilkens to “follow the evidence and leave ideology aside.”

Grinspun kept on the offensive Friday, saying she’s not worried about upsetting the mayor.

“I’m doing it for the people that are about to lose their lives in the streets of Windsor,” she said. “It’s about time to move because saving lives is important whether it’s a heart attack or an overdose. All of those are diseases.”

“The evidence is clear on this. It’s time the mayor moved. No one understands this. Everyone says he’s a good mayor. I don’t know your mayor. All I know is it’s an issue that is critical to save lives. He is choosing not to act.”

Windsor, Ont. marathon runners are off to the Boston Marathon