Mourners depart floral tributes to the Queen at Windsor Fort

Mourners have traveled hundreds of miles to lay cards and flowers outside the walls of Elizabeth II’s final resting place in Windsor Castle.

Although the official mourning period ended on Monday, when the late monarch was buried in St George’s Chapel, tributes have continued to pour in from across the country and the wider world.

Several cards, thanking Elizabeth for her service and expressing sympathy for the royal family, had been placed by people from as far away as Poland and Hong Kong.

Others were from closer at hand, with Fortescues, a cafe across the street from the castle, writing: “It has been a pleasure to be your neighbor.”

With the main entrance blocked off, flowers – particularly red roses and sunflowers – along with candles, flags, balloons and teddy bears have piled up along the castle’s west wall.

Twelve days have passed since Elizabeth’s death, but several passers-by were still moved to tears by the sight of the tributes.

Kim Singh, who has seen the Queen lying in state three times in the past week, came to lay a bunch of orange carnations.

“I felt it was respectful to come here,” Ms Singh, from Manchester, told the PA news agency.

“She’s at her resting point, she’s at home now. She’s out of the hustle and the bustle.”

Ms Singh, who spent more than fifty hours queuing to see Elizabeth’s coffin in Westminster Hall, explained she was determined to visit after missing a meeting with the monarch as a schoolgirl.

“I was the only one who was desperate to go to the loo so I left my place… my desk was empty, so she left me a coin and a spoon for the Silver Jubilee,” she said.

Several cards appeared to have been made by children, featuring drawings of Elizabeth and paying tribute to her role in the Girl Guides.

‘May flights of Angels sing thee to thy rest.’

In loving memory of Her Majesty The Queen.

Some had been smudged or washed away by rain, but others had been laminated to protect the pictures – which often showed the monarch holding hands with Paddington Bear.

Julie Brooke-Cavendish, who had traveled from Morecambe to lay a bunch of chrysanthemums and gladioli, said her anxiety issues meant she had never met Elizabeth.

“It’s been an emotional couple of weeks, and like everybody else I thought she’d be here forever,” she told PA. 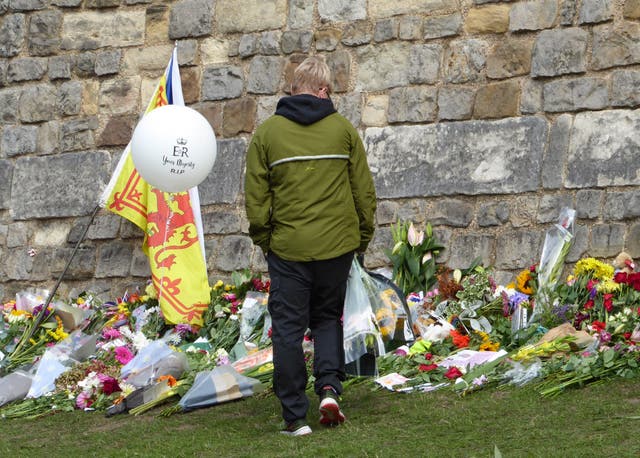 “She’s been around all our life, the Queen… I did want to go down to Westminster to give my respects but I can’t do massive crowds.”

Ms Brooke-Cavendish also brought a card that contained a poem – written by a friend – bidding farewell to Elizabeth and urging Charles to “be your mother’s son”.

“It’s about his loss and about his reign and how she will stand beside him even though she’s not here,” she explained.

Inflation is consuming away at these Windsor meals companies. This is how mayoral candidates plan to assist