Food banks in Windsor-Essex are seeing a growing demand for their service during the pandemic, many being first-time users, according to June Muir, CEO of the Unemployed Help Center (UHC).

She said a lot of the people accessing food banks are students, families and seniors who are out of work and need the support.

UHC reports it now provides food assistance to more than 1,600 adults and children per week.

People can pick up hampers, which are made up of non-perishable items and produce and provide a week’s worth of food. The hampers are available at either the UHC office using a conveyor belt system or at Adie Knox in the west end of the city, which offers drive-thru pick-up.

Muir calls it “trying times” for many who have been laid off from work due to the pandemic, adding that not many people can work from home.

Eric Katzman, a personal injury lawyer, considers himself lucky to be able to work from home during the pandemic and wants to help others who aren’t as fortunate. (Tahmina Aziz/CBC)

Windsor is among the cities with the highest unemployment rates in Canada.

According to Statistics Canada, the city’s unemployment rate stood at 11.1 per cent in December.

Even with the growing demand, Muir said the region is “very fortunate” to be receiving help from the community.

“We have a very caring community. And through the donations that we’ve received, we’re able to keep up with the demand. And it’s all due to the generosity of our community,” she said.

Eric Katzman, a personal injury lawyer, is one of many donors. He’s donated $10,000 to the organization.

He said he doesn’t find it surprising that more people are reliant on food banks right now.

“It’s not unexpected. I had assumed that people were struggling more so than normal,” he said, adding that he’s fortunate to still be working during the pandemic, unlike many others in Windsor-Essex. 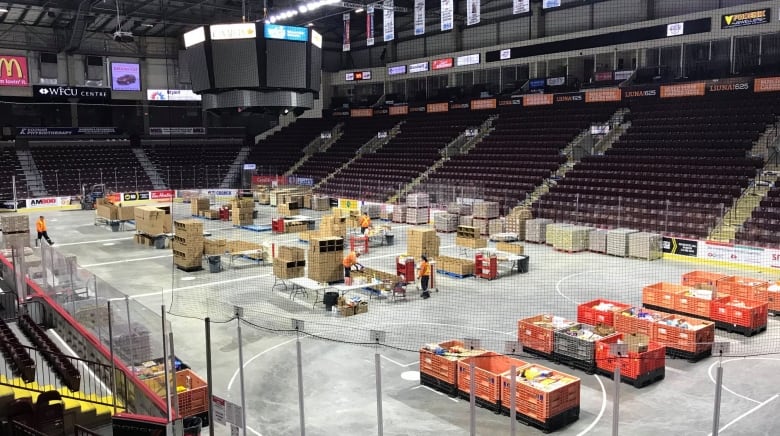 “Success or failure during the pandemic was a product of luck,” he said. “None of this is related to a willingness to work. It’s all related to luck.”

So, he decided to share his earnings and said he hopes that others, who are in a position to donate, do so as well.

“The need is now. The resources are required now. The support is needed now,” he said, adding that while donations may be have pouring in during the holiday season, they might dry up in the coming weeks if people don’t help .