Tuesday was a special day for the royal family as they attended a memorial service for the queen‘s late husband, Prince Philipwho sadly passed away in April 2021.

The monarch and members of her family gathered together at London’s Westminster Abbey for a service of thanksgiving, which paid tribute to Prince Philip’s dedication to family, the nation and the Commonwealth and in particular his contribution to public life.

WATCH: All about Lady Louise Windsor

In attendance were Prince Charles and Duchess Camilla, the Duke and Duchess of CambridgePrincess Anne and Sir Tim Laurence, and the Earl and Countess of Wessex along with their teenage children Lady Louise Windsor and James, Viscount Severn.

The young royal was sure to pay tribute to her late grandfather too, opting to wear her equestrian brooch – a nod to her and Philip’s shared passion for horse riding, in particular carriage riding, which the teenager has taken up in recent years. 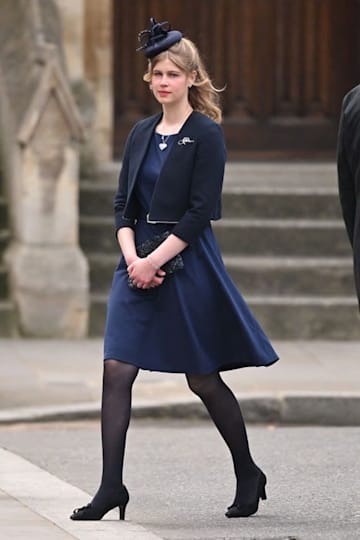 Louise looked radiant with a natural, yet sophisticated a makeup look, adding a touch of rouge to her cheeks and lips.

Louise was particularly close to her late grandfather, as they both shared a common interest of carriage driving, at which Louise is very talented.

back in 2019, Philip was pictured proudly watching his granddaughter compete in the Private Driving Singles carriage drive during the Royal Windsor Horse Show, where she achieved third place.

Lady Louise was joined by her mother, the Countess of Wessex

The Queen has been actively involved in the plans for Tuesday’s memorial service, which incorporated some elements initially planned for Philip’s funeral that were unable to go ahead due to the government’s COVID restrictions at the time.

These included hymns being sung, such as Guide me, O thou great Redeemer, which Philip had requested for his funeral as well as clergy from the royal estates of Windsor, Sandringham and Balmoral playing a part in the service, another of the Duke’s requests.