The operation is set to create 2,500 jobs in the region, with each level of government offering incentives for the project.

“This is the largest automotive investment in the history of our province and the country as well,” said Ford.

“This game-changing battery plant will help guarantee that Ontario is at the forefront of the electric vehicle revolution and ensure we remain a global leader in auto manufacturing just as we have been for over 100 years.”

The companies say they’ve “executed binding, definitive agreements” to establish the factory, set to have an annual production capacity of 45 gigawatt hours.

“This battery plant is going to supply across North America for us as one of two that we have envisioned,” said Stewart, adding the factory’s proximity to the US makes Windsor an ideal location for business.

Government officials as well as senior representatives from Stellantis and LG Energy Solution spoke at the announcement about the EV battery plant on Wednesday, touting benefits for the local community and Canadian auto sector as a whole. (Dale Molnar/CBC)

Stellantis plans to announce their second EV battery manufacturing plant, which will be in the US, in the coming weeks.

Stewart said Windsor’s new facility will be the size of about 112 NHL hockey rinks, with Champagne calling it Canada’s first gigafactory.

While each level of government has partnered in the deal to create massive incentives to the companies, it’s unclear how much funding the federal and provincial governments have kicked in.

When CBC News asked for details about the amount of taxpayer money that will be spent, Ford said: “I can’t divulge that. It would compromise some negotiations moving forward with other companies as well, but it’s a massive investment and its hundreds of millions of dollars.”

WATCH | Ford says he ‘can’t divulge’ how much Ontario, Ottawa have spent on the deal:

When asked how much federal and provincial funding is going toward a new $4.9-billion electric vehicle battery plant in Windsor, Ontario, Premier Doug Ford said he could not say for now.

For its part, the City of Windsor kicked in a land assembly deal for the massive factory, money toward infrastructure development if needed and a long-term tax grant, according to an official with the city.

The city is buying land for the site located at 9865 Twin Oaks Dr. at a cost of between $45 million and $50 million. The city will then lease the land to the joint venture between Stellantis and LG Energy Solution.

The official said the city has negotiated conditional offers with each of these corporate owners, in case either backs out.

Windsor is in the process of securing two sections of land needed for the site — one owned by Enwin and another owned by a private resident. 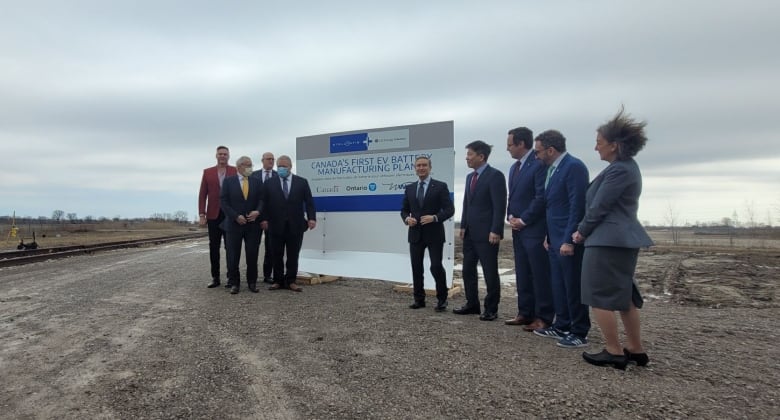 Government officials and business executives stand in front of the site of the planned EV battery plant in Windsor that’s expected to be operational in 2024. An official said the new facility will be the size of about 112 NHL hockey rinks. (Mike Evans/CBC)

“This was a whole-of-government approach, and so this is a highly competitive space — not just city versus city, within the province, across the country, throughout North America,” said Dilkens.

The mayor said the city would do everything in his power to make a smooth transition to the new plant, which is set to break ground later this year.

Our local roots are in manufacturing and automotive, and we’re darn good at it.– Drew Dilkens, mayor of Windsor, Ont.

“Our local roots are in manufacturing and automotive, and we’re darn good at it,” said Dilkens.

Nearly a week ago, Ford announced his government’s “critical minerals” strategy, aimed at capitalizing on the global demand for minerals crucial to items like EV batteries, and ensuring Ontario become a consistent supplier of those goods.

Heading into the official announcement, the prospect of an electric vehicle battery plant being built in Windsor sparked optimism about what it could mean for the region and the auto industry.

“This will put us on the map, not just here in North America, but globally,” said Rakesh Naidu, president and chief executive officer of the Windsor-Essex Regional Chamber of Commerce. “There’ll be a recognition of what Windsor-Essex can do in terms of not just how good we are in the conventional auto sector, but also in terms of the the new generation of auto technologies, and the new … EVs sector .”

Yvonne Pilon, President and CEO of WEtech Alliance, said the project would be great for talent retention and startup development in the region.

“There is a lot of technology in the electric vehicle, electric batteries, so from a startup perspective, we look at what this will mean for new companies coming to the region, new companies starting based on, again, a diversified and different supply chain ,” she said.

After many years of stagnation, Windsor inhabitants on regular rise

Who’s working for mayor and council at Windsor, Amherstburg, Essex, and Kingsville?